The religious experience in the Book of Psalms 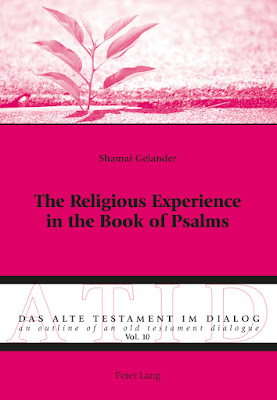 Synopsis
Virtually all books of the Old Testament express the world view and opinions of their authors, with a didactic purpose in mind. The writings of the historiographers, priests or prophets purportedly bringing the word of God are in fact expressions of the views of the spiritual leadership that conceived and consolidated the biblical monotheism. Although two books – Job and Ecclesiastes – express the dissenting views of authors who went against the prevailing and traditional views of morality, they are philosophical tracts reflecting the criticism and objections of rebellious individuals.
Not so the Book of Psalms. What makes the Book of Psalms unique is the fact that it provides an outlet for an individual or group of people who have come to pour their soul out before God. In other words – the psalms are an expression of the world of the pious individual and of his beliefs. That is not to say that they were composed by simple folk: the psalms themselves contain sufficient clues to indicate that they are the work of master poets. Nonetheless, the psalms are what the authors sought to place in the mouths of the worshipper – thinking, no doubt, that they would aptly express what was on his mind. In any event, one of the primary aims of this book is to try and uncover what the speaker is experiencing in each instance: what were his circumstances when voicing his prayer, and what feelings and ideas came together to forge the emotional and spiritual belief experience.